The Small Glories began their touring season of 2019 on a cold February night in a little old country church in Beausejour, Manitoba. Not the church that had been planned, mind you, because the furnace conked out and the toilets froze. We could see our breath when we got to the venue. “How do they heat this place?,” I wondered. “Looks like candles,” said JD. I laughed. “That’s it. Just light all the fucking candles!” I swear more when the temperatures drop from below zero Celsius to below zero Fahrenheit. That’s what the minus F stands for for me.

JD lit some candles on the old altar, and I called my buddy Mike McLean. Mike got the furnace going again, but when JD went to take a piss and found the water in the toilet bowl as solid as the porcelain that was holding it, Cara said, “What are we going to do?” 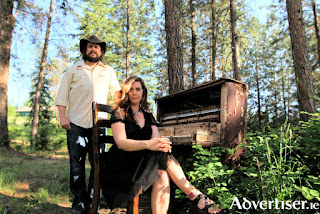 By that time folks were streaming in for the gig. Darlene Omichinski had a key for Zion Lutheran, but they were hosting a tap dance thing. Duane and Deb Versluis had keys for Grace Lutheran. Don Zueff joked that we would be going over to the dark side, but we all piled out the door and headed for Grace and warmth and working toilets. In the end it was just another Small Glory story, a story about trying to make something work, about failing and picking up the pieces and starting all over again.

It struck me that The Small Glories made it safe for us that night to all gather in one church, then safe to leave it and gather in another. That’s no small thing. I know this because I am friends with a lot of the people who came that night. Some of them can’t go to each other’s church, and a lot of them can’t go to church at all, because it’s dangerous for them. So it was odd, and glorious, to enter into music in a church that night that held space for all of us.

Those places are emptying out now. And after a while the toilets freeze or some other damn thing breaks down. I don’t know if we need churches any more. I do know that we need some songs that can gather us, and some places where we can sing together, now more than ever. “Truth is bread,” said Simone Weil, the 20th-century mystic who refused Christian baptism, “you know it by its taste.” I believe the same is true of art. It’s bread for the journey, and people nowadays are starving for it.

The Small Glories are feeding the people. They know something about truth and art and harmony. They know that one note can get together with a different note and open up a space between them that brings us all in. They know about the many ways we suffer, the many ways we love, the many ways we heal. Their new album is about a couple of come-from-aways who landed at the meeting place of the Assiniboine and the Red, a side-winding meanderer and a fat and lazy prairie river with more power than you would guess. Two wondrous travelers arrived here and made their home with us. I’m so glad they did.
Posted by Marcus Rempel at 2:05 PM No comments:

I've been catching up on the literature of CPT. CPT stands for Christian Peacemaker Teams. But today when I read their publications, I more often read the adjective "Christian" in reference to problematic nouns like "hegemony" or "Zionism." You can still see "christian" in the small font of their elegant logo, a white dove sitting on a length of barbed wire that is vining into an olive branch under the dove's feet. The dove's eyes are keeping close watch on the barb. The olive leaves are either less interesting than the barb, or simply growing of their accord, like the seed of the kingdom that sprouts and grows, we know not how. (Mark 4:27)

In its repentance of Christian hegemony and its growing friendships with peacemakers of many faiths, CPT today identifies its mission as "Inclusive, multi-faith, spiritually guided peacemaking." I am encouraged and troubled by this, both at the same time. CPT for years has been a light on the hill that I could point to to say, this is what authentic Christian action looks like in the world. With so many abuses committed in the name of my saviour, CPT was an example I could feel proud of. "No one after lighting a lamp puts it under a bushel basket," says Christ in the conclusion of the Beatitudes. Then, not long after, he says, "Beware of practicing your piety before others in order to be seen by them." Oh, Christ, you're on to me again.

The early Christians, in their astonishment at the light of Christ, made bold claims. "God...highly exalted him...so that at the name of Jesus every knee should bend...and every tongue confess that Jesus Christ is Lord." (Phillipians 2:9-11) David Cayley, in a recent interview on The Ferment, says that anyone who is a Christian, if they really are a Christian, wants to share the Good News. But he soon after adds that the prerequisite of this sharing is a profound silence before the other.

In the great "every knee, every tongue" hymn of Phillipians, Christ's glory is coupled with and preceded by Christ's supreme humility:

"though he was in the form of God,
did not regard equality with God
as something to be exploited,
but emptied himself,
taking the form of human likeness.
And being found in human form,
he humbled himself
and became obedient to the point of death--
even death on a cross."
(2:6-8)

In light of this example Christians are exhorted: "Let the same mind be in you that was also in Christ Jesus." (2:5)

For many of us Christians who are waking up to our history of arrogance and our complicity in colonial oppression, there is an impulse to recoil at the early church's proclamation of the universal lordship of Jesus Christ. Of course. A more convenient handmaiden to empire could hardly be found.

But this continues to cast the problem of Christian mission into the categories of who is better than whom. The early church cast the problem in categories that are more radical, and more revealing: Christ/Anti-Christ. They understood the Love Supreme that was astonishingly, uniquely and indispensably revealed on the Cross of Christ to be accompanied by a supreme danger: a new "mystery of wickedness" nested in the church, capable of a kind of evil not seen in the world before. Ivan Illich, who I am following here, taught me to see that the lordship of Christ, uncoupled from Christ's humility, could become an imperial standard that could violate not only the geographic sovereignty, but the spiritual sovereignty of the other. Roman spiritual imperialism only insisted that you bow before their gods. Christian spiritual imperialism insisted that you invite the colonial anti-Christ into your heart.

In a recent interview, Cree elder Walking Buffalo (Stan McKay), reflecting on the confusing character of Canadian racism that he experienced in residential school, said, "Many of them were nice to us, even as they were destroying us." As I watched the viral video this week of calm, polite CFS workers and RCMP officers take yet another baby from the arms of yet another weeping Indigenous mother, Stan's words rang in my ears. There is a mysterious, confusing evil at work among us.

When Stan recalls the teachings of his mother and father to never take more than you need from the earth, and to consider anything extra you have as something to be shared in community, I have to confess (as did a significant minority of early missionaries) that the cultures that Europeans encountered on Turtle Island were spiritually more attuned to the way of life outlined in Jesus' Sermon on the Mount than the grasping, control-seeking, imperial cultures that funded the drive for Christian conversions in this place. When my Haudenosaunee friend Adrian Jacobs asserts in an Indigenous Testamur that Indigenous theology is the host of any non-Indigenous spiritual tradition brought into this place, I breathe in the hope of the Beatitudes: that it is the anawim, the humble, righteous, simple-living people--who we call in English "the meek"--who are the rightful inheritors of the earth. When the people who in their own languages call themselves Inninew or Anishnaabeeg tell us that they are the keepers of the earth in this place, set here by the Creator to practice Mino Pimatissiwin--the good life lived in harmony with all our relations, I understand them to be saying little else. When these meek (again) inherit the earth, I will understand our prayers for Christ's kingdom to "come on earth as it is in heaven" to be answered.

Posted by Marcus Rempel at 11:41 AM No comments:

There is a vast generation that has been traumatized by the Gospel story as a propaganda tract for terror and war, as a bedtime story for cultural euthanization. Before this generation the evangelist must now keep silent. But there is another generation coming up behind this one that will be traumatized by their lack of any story at all, of a story that can make sense of their twittered and splintered existence, and of the apocalypse that is coming for us all. The day will come when they will need the story of the angel in the fiery furnace, or they will go mad in the great conflagration that is underway. Already any of them who are awake see the flames licking at the doors of their house. It is for them that we must hold the story of a peace not as the world gives, a story of forgiveness, resurrection, and the eternal possibility of beginning afresh.
Posted by Marcus Rempel at 9:13 AM 1 comment: